With an online MBA degree from Saint Leo, entrepreneur Tom Rothrauff plans to take both his business skills and his global maritime security company to the next level.

Successful completion of what could easily be considered the most mentally challenging and physically demanding training in the world earns a candidate his SEAL Trident insignia.

But a career as a successful SEAL is a constant process of learning new skills and improving and refining existing ones.

That way of life took on added meaning for Tom Rothrauff when, after 15 years as a Navy SEAL, he severed his left leg above the ankle in a motorcycle accident. Fitted with a prosthesis, he had a year to prove he could pass grueling swimming, diving, parachuting and running tests to remain in the Teams among America’s elite special operations forces.

He was successful and continued his Navy career for another five years.

That inherent combination of determination and drive to constantly become better, stronger, more efficient, and more capable is the primary reason why Tom is now enrolled in Saint Leo University’s online MBA program.

Simply put, he wants to become a better businessman. 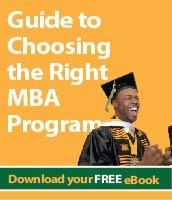 After he retired from his Navy career, Tom joined with other seasoned veterans of the U.S. Navy Special Warfare community and senior officers of the U.S. Navy Surface Warfare Fleet to start his own maritime security company called the Trident Group.

Tom has served as president since its inception 13 years ago, growing the fledging enterprise into an internationally successful multi-million dollar operation.

Last fall, however, Tom decided that if he wanted to continue to expand his company’s reach overseas, he would need to take his own business skills and knowledge to the next level.

Here are some of Tom’s thoughts about his business, his career, and his decision to start an online MBA program at Saint Leo University.

After 20 years as a Navy SEAL, what made you decide to start your own business?

I spent many years in the Navy with a Tier 1 response group that was heavily into maritime operations. During that time I was involved with projects requiring time spent aboard many cruise ships as well as commercial merchant vessels. This experience gave me tremendous insight into the critical need vessel owners, captains and managers had for ensuring the security of their vessels. So I decided that when I retired I wanted to open a maritime security company that would provide this service to the commercial maritime market. My dad is a retired Navy captain, and he thought it was a great idea. So we launched the business together.

What types of services does Trident Group provide?

Pirate attacks are a major problem in the international shipping industry, and governments alone don’t have the resources to solve the problem. The shipping industry, itself, has to assume greater responsibility for the protection of vessels. Trident Group has developed proprietary security solutions in support of maritime security initiatives. This includes everything from unique vulnerability assessments and providing armed, onboard security teams anywhere in the world to patented technology that detects and deters any unauthorized attempt to access vessels or oil rigs.

How have you differentiated your business in the marketplace?/strong>

Our operatives are only former Navy SEALs. It’s a standard that sets us apart from anyone else in the world, and we won’t ever deviate from that standard. In this business, it’s imperative that seasoned, skilled operatives are deployed with a clearly defined use of force matrix.

Where do you do business?

We protect ships worldwide as well as gas and oil platforms in the ocean or in coastal areas. We are required to commercially operate and maintain license and access all over the world: Egypt, Oman, Sri Lanka, and throughout the African continent, for example. We provide armed escort services from the Suez Canal into the Red Sea, Gulf of Aden, Arabian Sea, Straits of Hormuz, and throughout the Indian Ocean.

What do you find satisfying about running your own company?

I love the successes – when things work out well and a client is grateful and sees the quality of our work. I give my heart and soul to this business, so I take everything very personally.

Why did you decide to get an MBA degree?

Throughout the development and growth of the company, I’ve learned a great deal about the basics of business through experience. But the time came for a more formal education in order to support business growth and worldwide expansion.

What do you hope to gain through graduate business studies?

Trident has grown to an international level which requires flexible thinking and intelligent analysis of the world market and economic climate. I want to learn as much as possible about conducting business in the United States. And because we also operate internationally, I hope to gain a more robust knowledge base from which to adapt the way we conduct business overseas.

Why did you choose Saint Leo University’s online MBA program?

I earned my undergraduate degree in criminology at Saint Leo’s Little Creek Center while I was in the Teams in between deployments and during a year of shore duty and I had a great experience. I also knew I needed an MBA degree program that was online because my business is so time consuming that I couldn’t possibly go anywhere that had a residency requirement.

You’ve just started the degree program, but have you learned anything so far that you can apply to your business?

I’m learning the “why” behind a lot of the things that I have been doing instinctively as well as how to do them more efficiently and effectively. One example is with the management of my personnel. Trident manages two distinct operations – one that stays in the states and one that is deployed. They can become polarized. So I’m learning about how teams work and the importance of providing a stable corporate culture that enables everyone to be effective.

Is the online MBA program changing you in any other ways?

Did you know that Saint Leo offers an accelerated MBA degree?

Online MBA Programs: Are They Worth It?