From the time of its founding in 1889, the mission of Saint Leo—to educate and serve—has been illuminated with instances of resourcefulness, ingenuity fulfillment of purpose. It was over four decades ago that Saint Leo brought courses for the first time to 176 students at Avon Park and 13 students at MacDill Air Force Base. Today, close to 6,000 men and women of the armed forces, veterans, and their family members are enrolled in Saint Leo University degree programs - that's about one-third of our university-wide student community.

In 1973, Saint Leo University stepped up to serve college courses and degree programs to the military—before many U.S. colleges and universities recognized active military, veterans and their families as an important student community.

In the decades Saint Leo University has come to be known as one of America's largest and most committed providers of higher education to the U.S. military. Thousands of active duty service members, veterans and family members worldwide earn affordable, accessible university degrees through our traditional Florida campus, extensive online program offerings and Education Centers on military bases throughout the U.S.

Saint Leo University is ranked as one of the leading providers of higher education to the military, as noted in G.I. Jobs, Military Advanced Education, and other publications. In November 2014 the Northeast Florida Education Center, along with the School District of Clay County (FL), was chosen by the Military Child Education Coalition as one of five national recipients to receive the 2014 Pete Taylor Partnership of Excellence Award, which recognizes successful partnerships and projects that ultimately benefit military-connected children.

Commemorating Those Who Serve

In 2008, Saint Leo University commissioned a bronze sculpture for our campus to commemorate 35 years of educating the men and women of our nation's armed forces.

On Veterans Day 2010, the sculpture was dedicated in an evening ceremony that drew more than 400 attendees, many of them veterans and active-duty service members.

The sculpture, "For Those Who Serve," honors the five branches of the military, as well as our faculty and staff who are devoted to leading the men and women of the U.S. armed forces toward growth and fulfillment of purpose. 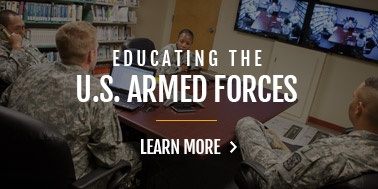